Cargo ship-induced emotional wrestling with the spectre of STUFF, aka global consumerism, its enormity and its impacts, left me even more curious and keen to explore Costa Rica: No 1 in The Happy Planet Index of high quality human life for low environmental impact, and a world leader in terms of forest regeneration and protection (having once been one of the most deforested countries on earth.) How have they achieved this? What were the drivers? Is it replicable? And, is it really as good as it sounds? 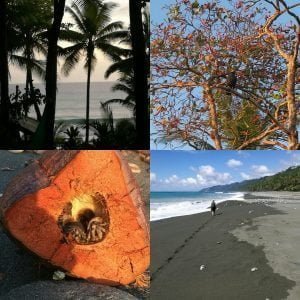 Thanks more to luck than judgment, and the very good advice of a good friend and Costa Rican aficionado, Cath Curd, we went first to the Osa Peninsula – and very nearly didn’t leave. WOW. Putting all the facts and figures aside – 51% of the country is now forested, with about 24% still primary forest; Costa Rica has only 0.03% of the earth’s land surface but nearly 6% of all the world’s biodiversity – it’s the sheer aliveness, lushness, vitality and, well, diversity of biodiversity that captures your heart and floods your senses. Wonderful, just wonderful.

From the extraordinary architecture of immense trees and extravagantly various foliage to the strange, haunting call of the toucans; from the constantly moving columns of leaf-cutter ants with their little, twisting squares of bright green leaf to the brilliant blue flash of morpho butterflies, their wings the size of small saucers, to the sheer vastness of the Pacific beach, palm fringed and rainforest-backdropped. Running alongside Corcovado National Park, at one scale the beach seems empty, stretching away for miles towards a horizon hazy with spray. At another, it is busy with hermit crabs and rolling, breaking waves and the utterly beautiful flight of pelicans, moving low over the waves in formation like geese, catching the uplift, flying so close that their wings almost skim the curling, turquoise water.

We’ve had various guides, all excellent. Most had a particular enthusiasm. For Marcello, it was snakes. ‘Ever since I 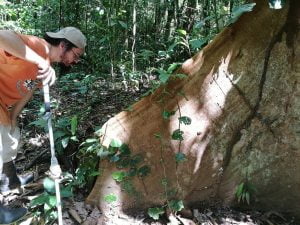 was a toddler, I’ve been drawn to snakes’ he told us. ‘You must have been a nightmare toddler,’ I said. ‘Yes. And a nightmare young adult too, always greeted with, “whatever you have in that bag, it is not allowed in the house!”’ I very much sympathised, though in my case it was large dogs as a toddler followed by various rescued dogs of all sizes, most also banned. Marcello, straggly dark hair in a ponytail and a pointy twist of a beard, was particularly passionate about bushmaster snakes, the largest and I think most venomous in Costa Rica. For Milton, it was all endemic species. ‘I love Costa Rica. And so I love all Costa Rican plants and animals too,’ he explained.

Both were brilliant at revealing the presence of hitherto invisible lizards, tiny poison dart frogs, diverse birds and other animals large and small we would never have noticed, and both were hugely knowledgeable about rainforest ecology which they shared mainly through stories of intricate interaction and interdependence. Such as the ants who 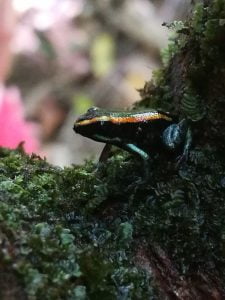 live in the hollow thorns of an acacia tree, and kill all the saplings around it so the tree never has rivals for sunshine. The ants in turn are ‘captured’ by the acacia, their stomach enzymes altered so they can only feed on that tree. Or the numerous species of birds that live in relation to army ants, picking up the startled insects the ants disrupt, or the birds that make a living from following monkeys. ‘Spot the squirrel monkeys and there will almost always be a double-toothed kite nearby.’ (Milton)

The guides’ view of Costa Rica was positive about the present and optimistic for the future. The secret, in their view, was a sort of perfect storm of mutually reinforcing factors: a group of environmentalists a few decades ago that happened to have powerful political friends; the politicians being persuaded to halt the forest destruction and preserve and regenerate just at a time when eco-tourism was taking off; the subsequent huge rise in ecotourism generating highly significant amounts of income and jobs, adding up to huge people/nature win/wins; and widespread, consistent environmental education in schools creating an informed and on-side citizenry. 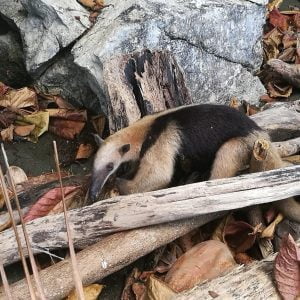 We were later to hear rather different versions of the Costa Rican story but for these guides, their main frustration was that most tourists really only wanted to see the animals. The big, sexy animals. And we did too. As yet, no puma, tapir or sloth (bar one apparently comatose in a park in Cartagena) but many monkeys (there are four kinds here), a totally delightful troupe of coati, an anteater – captivating not least for being utterly unlike anything you would see in the UK – and a ‘crazy’ armadillo, busy hunting hermit crabs and ants in the middle of the day. That’s the thing about charismatic megafauna – they are charismatic. (And interesting: did you know an armadillo has two ways of crossing rivers? It can inflate its stomach with air and float across. Or hold its breath and walk across the bottom – but only for 6 minutes. Which technique to use must be a finely calculated decision.)

The experience of having these animals revealed by great guides is just brilliant. And underpinned by a classically thorny dilemma. The guides clearly wanted to talk less about animals and more about rainforest ecology. And, while the guides we’ve met so far have all excelled at stories of interconnection and interdependence among other-than-human species, we have heard hardly anything about how WE rely on forest ecosystems; nor how we are impacting on them, nor how all of this connects to our everyday lives. So here’s the dilemma: when you have a country whose main income is selling experiences of nature, is it even possible for the guides to move beyond pointing out charismatic megafauna to a discussion of critical mini-fauna and a deeper engagement with the importance of rainforest and other ecosystems? Can a country that makes its living through ‘selling’ nature get away from simply commodifying it into a series of popular experiences into something more like critically engaged environmental education? And if it can’t, does it matter?

Given that charismatic nature tourism provides enough income to secure both jobs and forest protection, maybe not. On the other hand, you could argue the exact opposite, too. People may leave full of wonder at these extraordinary creatures (and trees, there are definitely charismatic trees) but the experience runs the risk of reinforcing a deeply problematic mindset, arguably dominant in the west (and westernising) world. This is the view that nature is a) out there, away from us, somewhere we go to visit and b) wonderful and beautiful and full of intrigue, but not critical to our survival. A Costa Rican eco-tour can be a bit like being on a set for Planet Earth II only without the telephoto lenses and time-compression (was it E.O.Wilson who said, rainforests look better on TV?!) Both are wonderful, but neither positions people – us humans – as in nature and part of nature and utterly dependent on and integrated with nature, including this nature right here (as well as the nature back home, wherever that is). Can we tackle profound environmental unsustainability if we don’t tackle the worldview that underpins it? Personally, I don’t think so…. 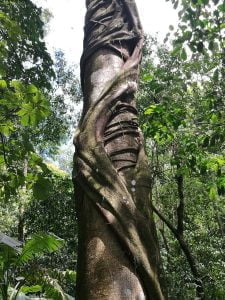 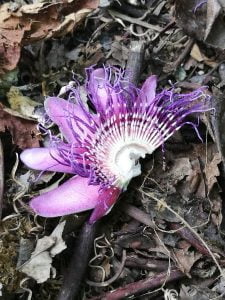