The seabird flotilla left us not long after we departed French waters. For days, we saw only waves, and occasional 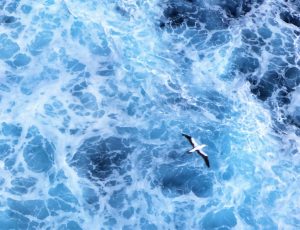 flying fish. Then a solitary bird joined us for hours, hanging alongside us, arcing back for a fish-dive, then slip-streaming close to the ship until it was ahead of us again, all apparently effortlessly. The bird was gannet-shaped, and mostly gannet-coloured (though with different wing and head markings), and gannet-behaved; diving with elbowed wings folded flat against its spear of a body only at the last minute. When the water was calm we could see the turquoise trajectory of its short dive, until it bounced back to the surface like a cork, gulping fish, lifting off into the sky. The next day, two and sometimes three of these birds (boobys, I figured out later) looped our ship for hours. I watched them for hours, too, feeling happy to see them, and somehow moved. I know there is teeming life in the sea, but we were seeing little of it from the surface. The days when we didn’t see any other-than-human-life made me think of the oceans in Cormac McCarthy’s The Road, dead, just billions of tons of water sloshing about. Horrifying, and deeply lonely (and actually we’d be dead, too, given how critical ocean ecosystems are to land life.) 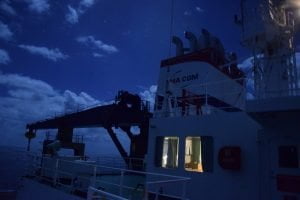 For several nights the moon rose almost directly behind us, slightly off to the port side. Standing on deck, looking aft, the moonlight fell almost exactly parallel to our wake. Where it struck the watery spaces between the lattice of froth, dark water turned to molten silver. And of course the whole thing was in motion, the disturbed water constantly changing shapes and moving away from us. It looked as if someone was playing torches underneath the surface of the water, lit from below in constantly moving, vivid flashes. It was almost dangerously alluring, like a will o’ the wisp, calling us to jump in…. we spent hours for several evenings around the full moon, watching this mercurial and utterly beautiful light show.

A final highlight of a very different kind was a guided tour of the engine ‘room’: multiple stories of incredible heat and 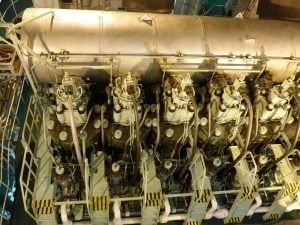 noise housing an eight cylinder, 33,550 horse power engine (your average Renault Clio would be about 80 horsepower.) Not even big by cargo ship standards, apparently. The drive shaft was visible and large enough to have a small footbridge over it for ease of access, running alongside cylinders and alternators and massive exhaust pipes. Visually sumptuous, and kind of amazing. This engine moves the ship, obviously, but also powers all the lights, the hot water and, on some ships, it would run a desalinator too. Our engine has been moving us across the ocean at a fairly constant 16 knots – roughly 16mph. A strong cyclist could average this (though possibly not day and night); I loved the idea that we were crossing the Atlantic at roughly bicycle speed. 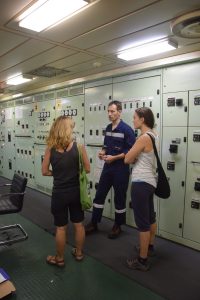 The engine runs mostly on ‘heavy’ – a waste product from the diesel industry, not exactly CO2 light. The chief engineer told us the ship has a green certificate because recyclable waste (including the thousands of plastic water bottles that provide the entire ship with drinking water) is separated; though he was skeptical about its chances of actually being recycled after it left the ship. BUT the bigger picture where, arguably, even more significant issues lie, was left completely out of the picture.

The sheer enormity of this bigger – vaster – picture came home to us in Kingston. We watched the ship dock from the 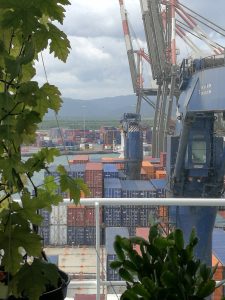 bridge (where the plants are real, albeit slightly anemic-looking): a snapshot of the constant 24/7 movement of containers, from one ship to another ship, from one country to another country, and back. No-one on board seemed entirely sure what was in ours. The captain said he thought the contents included building materials, white goods and a lot of artificial fertilizers and pesticides for Costa Rica on the way out (pesticides for environmental pin-up and champion, Costa Rica?!); and that they would probably contain mostly pineapples and bananas on the way back. 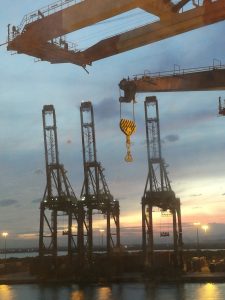 Whatever the content of the containers, getting a green certificate for possibly non-existent plastic recycling on board a ship that is part of a deeply problematic industry began to seem like a potent symbol of utterly missing the sustainability point: the madness of a system that both generates and depends on the movement of tonnes and tonnes of stuff endlessly around the world, all powered by ‘heavy’ with correspondingly huge carbon (and other environmental) costs. As a passenger, my carbon footprint was greatly reduced by crossing the Atlantic this way rather than flying (see blogpost: https://www.outdoorphilosophy.co.uk/…/why-to-build-a-bamboo…/ ) But the cargo industry is huge and, as an industry, it has a far bigger per annum carbon footprint than aviation.

Too much stuff. A theme emerging at many levels, from my panniers at one end of the scale to the impacts of globalized, corporate consumerism at the other; a potent threat to all of us, from boobys to humans, to entire ocean ecosystems…. And, as an individual, how on earth do we find ways, not just to look the big picture in the eye, as it were, but to figure out effective and meaningful ways of responding, so that McCarthy’s dark vision does not come anywhere close to reality? 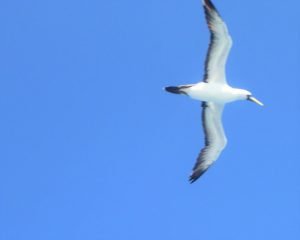 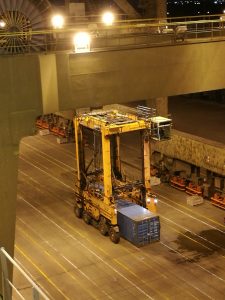 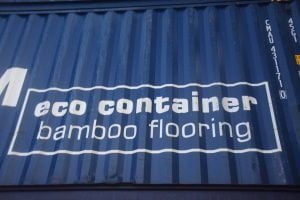 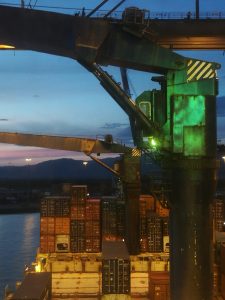