…… My cabin is dark when I wake. I pull up the blind – and it’s still dark outside too. On deck a little later with the sun coming up, there is a huge pink sky and a small flotilla of gulls hanging alongside us. It’s breathtakingly beautiful. I am so, so delighted to be here… 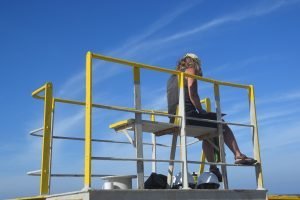 The first few days are a glorious mix of emotions. Sheer happiness, shot through with a slow-breaking, utterly luxurious sense of time. After months of constantly ratcheting up, too-much-to-do-in-the-days-I-have left, pre-departure mayhem, I suddenly have nearly two weeks to catch my breath and just be; to find the least windy corners on deck and sit and watch waves. Then we catch the tail end of a storm and a twisting swell takes me straight back to Sea Dragon days and the rueful thought that maybe I don’t have any time after all; or at least, not to do anything other than retch and sleep. For a day or so I can only cope with being horizontal, and every time I become horizontal, I fall asleep. I have the distinct impression my body is saying, ‘oh no, not this again’, and shutting down in self-defence.

And excitement. Why is novelty exciting? Wandering the decks post sea-sickness, soaking up the new shapes and colours of cargo-ship architecture, absorbing as much as I can before it fades into familiarity. A flashback to myself as a naïve teenager, roaming the Aberdeen docks late at night and fantasizing that the ship I always seemed to see there would one day take me off on an adventure. It turned out to be a dredger but, with a slight shock, I realise it has sort of happened. Here I am, on a ship heading off on an adventure… 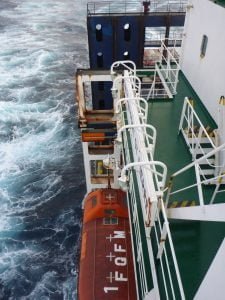 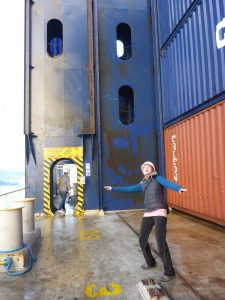 Early on, we are given a safety briefing. We are told to ring the bridge for permission before we go on deck (though this is rapidly let slip); that in case of certain swell height and/or high winds this permission will be denied; that we may access the cargo deck in good weather but only after asking further permission and with helmets. There is a talk about emergency signals and procedures, and a sheet of test questions that we have to complete and hand in later. What is the signal for abandon ship? For fire? For a general emergency? Where do you go in each case? Where is the muster station? We are shown how to start the lifeboat’s engine and activate its emergency release. There is no assumption that someone else will necessarily be there to do this. 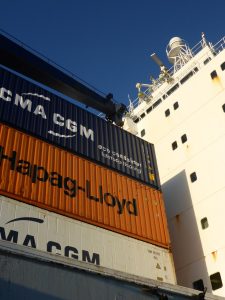 Every day it gets sunnier and warmer until, by the time we are about parallel to the Sahara, the heat is immense. I realise how strange it is, as a Brit, associating the Atlantic with rough and freezing Scottish seas, to be on a hot Atlantic. It is utterly different from the biting, damp cold we began with. At night during the first few days I was on deck in two down jackets. Now I untether one of the two deck loungers – big brown plastic affairs, heavy enough not to scoot about deck in the swell – and spend most of a day on ‘our’ deck, reading in the space next to the empty (and very small) swimming pool, in front of a rattling cage of large bottles of hydrogen (used to fill the weather balloons.) Occasionally, a flurry of sooty flakes rains down, leaving black marks on me, the towel, the deck and my book. If you touch these marks, they smear. This is definitely not a cruise ship, or even a ferry. But when a cruise ship goes past behind us – ‘Disney Magic’, heading for the Bahamas, according to the bridge radar plotter – while we are all struck by what a different voyage that would be, none of us (passengers at least) remotely want to change places.

For us, privileged and essentially on holiday, the whole thing is just so interesting. From karaoke evenings Philippino style to a champagne ‘meet and greet’ with the captain and senior French crew that turns into a conversation about the social hierarchies on board, the differences between pay and conditions of the French and Asian crew; the madness of hauling all this stuff around the world, why sails on cargo ships are unlikely (in their opinion) ever to really take off; and whether it would be possible to have a greenhouse on deck so that crew who are on board for many month on end could have fresh veg. 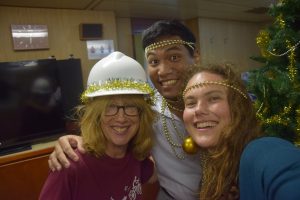 room. It’s an artificial one, of course, and he’s had to leave off the top section because it would scrape against the ceiling panels. So it has some slightly random spikey silver baubles leaning at a Pisa tower sort of angle on top instead, plus lots of gold tinsel (some of which ended up on my cargo deck helmet), a subtle mix of pink, gold and deep blue shiny balls and some silver bead-like chains, one of which is discretely tethering the tree to the curtain tie-back hook. Alicia joined us and there was much goofing about and a great threesome photo, me with my tinselled helmet and she with the silver chains round her head looking like something out of The Great Gatsby.

And of course, there is the wildlife. Walking forward on the cargo deck – which is just above sea- 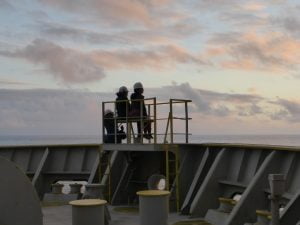 level – there is a point where you suddenly lose the engine noise, and it sounds and feels like being on a yacht, just the swoosh of the bow-waves breaking and curling. At the very front, there is a small raised platform, with a bench just big enough for three. There, we are really close to the ocean; even a mild swell is exhilarating. It becomes a favourite spot, and the three of us, thoroughly enjoying our emerging sense of comradeship, often don helmets and head down for the last hour of sunshine. 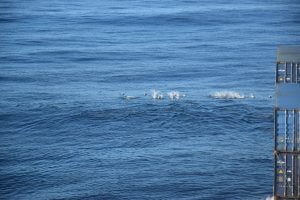 From there we occasionally see dolphins, bursting off the bow-wave in little clusters of staccato black fins, exploding through the surface and spraying the water like gun shot. They make everyone grin. And flying fish! I kept thinking my eyes were playing tricks but now I’ve seen them often enough to be sure. They leap out of the waves, low down, a few at a time, shiny-white and moving fast. Sometimes they arch across the surface like silvery skimming stones. Sometimes they leap from the bow wave as if saying holy shit, what the f**k was that?! as the hulk of the ship bears down on them. Sometimes they really fly far. One afternoon on the cargo deck we saw them close-up; bluish turquoise, with cartilage veins in their wings/fins that makes them look somehow archaic, like ancient dragonflies, taken to the seas…. 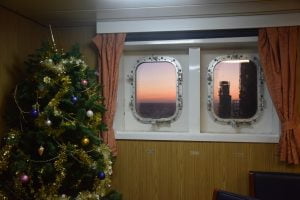 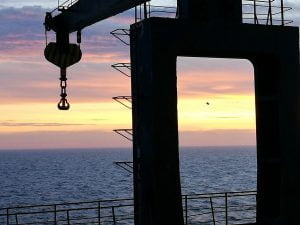