Le Havre December 6th, definitely on the dazed and sleepy side. Woody and I were delivered to ship 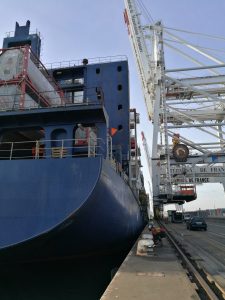 no 2 (after three trains, a cross channel ferry and, don’t ask, a London black cab) at high speed by a ‘Grand Taxi’ whose driver dismantled the back of his car, loaded Woody plus panniers and then said, ‘excuse me, but I have to’, squeezed my thigh to check for muscles, and hurtled me several miles around the harbour, through various checkpoints and back into the harbour at Terminal de France.

It looked like something out of any one of the movies that feature scenes in cargo ship docks: rows and rows of massive white cranes – no, cranes doesn’t really capture it – gantry-arms, as high as multi-story buildings and wide enough for small vehicles to drive along, reaching across from the acres of blue, orange and white containers to the harbour docking points. And there, on the murky harbour water, SS Fort St Pierre, a massive hulk of blue stern utterly dwarfing the unloaded bike. A steep, stepped ramp lead up to the boat and I began to take the panniers off but Christian, the passenger steward, stopped me. Other crew appeared with straps and Woody, all five bags still loaded, was hauled into the air, dangling unceremoniously alongside the huge blue hull. 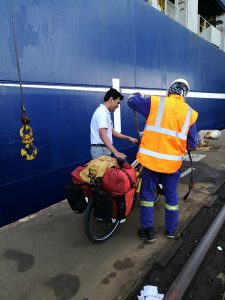 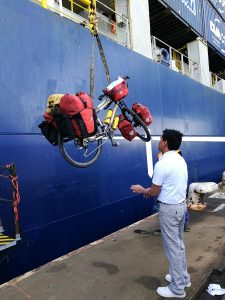 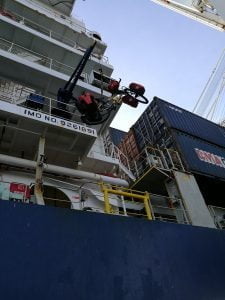 I realise I had no idea how this was going to be. Reassured by the friendliness of the crew, I am 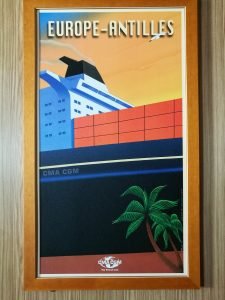 taken to an on-board office, where I hand over my passport and have my photo taken for ID. I am then deposited in the recreation room with all the panniers – sofas, a couple of tables, large portholes facing forwards, a coffee machine, a container of artificial flowers (yellow and orange) and a stylised picture of a cargo ship in the Antilles that turns out to be one of a series – and left there while Christian cleans my cabin. It transpires that the first mate has been using it, that I wasn’t expected until 5pm and that we are not leaving until tomorrow.

Now on board I can’t easily leave or even go outside into the beautiful, cold sunshine – access-to-deck doors must be locked while in port. I let go of the thought that I could easily have visited the Natural History Museum in Le Havre after all, and or found wifi and done those last ten jobs. I let go of all that and think ‘I am here. On board!!’ I realise how deeply uncertain I’ve been that I would ever actually make it this far, actually be here, on this ship, about to cross the Atlantic heading for Colombia. I change my socks. And sit and arrive. 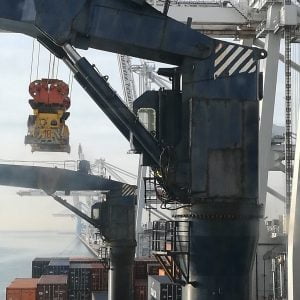 Dinner. 7pm prompt. I’ve started my starter when the other two passengers, Isabella and Alica, arrive. Both in their 30’s, Austrian with near perfect English and Spanish. They are heading for Colombia too. Isabella is doing some sort of research there, to do with natural resources and democracy. I try to ask more but we are all so tired that I can’t really take in what she’s saying and it’s clearly a strain for her to say it. But it’s already amazing that these lovely, smart, interesting women are the people I will share this journey with, of everyone it could have been. The food is amazing, too, once I’ve pulled the fish out of the stew (that I’m the kind of vegetarian that doesn’t eat fish is a message that takes a while to get through.) Erlito, in charge of the officer/passenger mess, tells us most passengers leave several kilos heavier. A dividing wall half-separates the room. The senior crew – all French – eat on one side; passengers the other. The rest of the crew, elsewhere. We are learning fast about ship hierarchies. We seem to lie somewhere between the senior French crew and the rest.

Suddenly Alicia says, we are moving!! No, surely not, if we are leaving tomorrow?! We jump up and yes, we are!! All three of us abandon food and dash outside. The port has already gone and we are pulling away from shore at quite a pace, waves curling from the bow and shining white in the darkness. They are ringing people, and I am sending texts about this latest twist and sooner-than-later loss of contact. Chris, Bill, Dad.

Later I go back outside again. There is a line of ships on the near horizon, sparkling like long jewels between the dark sea and the dark sky. It is beautiful, just beautiful. I feel a huge uprush of sheer excitement. Underway. Heading for Colombia! And then I can’t stay awake any longer. It is suddenly a huge relief to be in my cabin, alone, in my bed. I am out in seconds and sleep for at least ten hours….