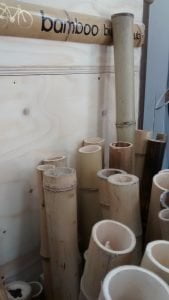 First, choose your bamboo! Held upright in a wooded rack along a wall in the portion of East London warehouse that houses the Bamboo Bicycle Club, is a small forest of canes, loosely organised by length. We’re told to look for pieces with long, straight fibres, few blemishes, and no black lines. There’s a surprising variety of both diameter and colour. Many are the pale, sandy colour I’d anticipated but some are a rich, dark brown and a few have beautiful, spotty patterns, like some kind of woody leopard or fawn. We – Emily, Sam and me – rummage and pick out canes, stroking their smooth surfaces, testing their weights. Selecting our canes feels significant and hard, like choosing a kitten from a litter. These sticks will become bikes we’ll be living with for years, their personalities and looks shaped by these choices in ways we can’t fully discern.

In my case, the decisions are made easier by being more limited. My bike is to be constructed from bamboo grown in Cornwall at The Eden Project, a new and potentially exciting relationship that could allow the Bamboo Bicycle Club to further reduce the carbon footprint of its already low-carbon bikes. This bamboo, not long arrived from Eden, waits in a separate cluster. Slender, a mix of pale dun to buttery yellow, the UK’s first ‘home grown bicycle’ will, with a bit of luck, emerge from that little pile of canes. 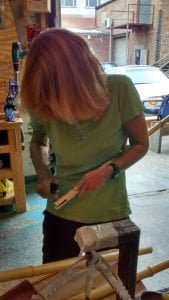 From there, the process unfolds at a fairly fast pace, interspersed with extended periods of doing the same thing for a 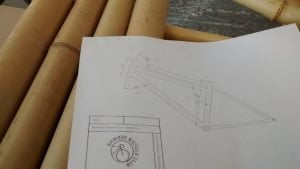 long time. Based on various body measurements (in the course of procuring which I’m peeved to discover I’m an inch shorter than I used to be!) and conversations about what we want our bikes to be able to do, a computer generated, human-tweaked frame design has duly emerged. In this case, the three of us all want tough touring bikes, designed to carry weight over long distances off and on road.

‘You can build whatever bike you like from bamboo, though,’ James Marr, founder/owner of 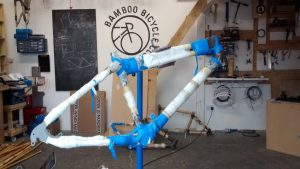 the BBC, tells us, ‘racers, tourers, single speeds, tandems…’ On further questioning he concedes that no-one has yet built either a unicycle or a penny farthing, but pretty much every other bicycle form and shape is represented in the workshop, hung from ceilings and walls, frames and finished bikes and photographs. Some are rough and ready. And some, truly, startlingly, uniquely beautiful. 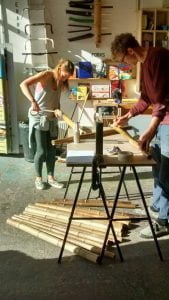 With the basic design agreed – it’s been printed out and waits on our construction tables as the design pattern – the first main tasks are all about assembling the frame. Cutting the bamboo into the right lengths, cutting angles into the ends of those lengths, scraping the waxy surface off sections of canes where they are to join, so that the resin we’ll use to make the joints can penetrate. There is a lot of cutting and a lot of scraping. By the end of the second day, though, we are soaking long strips of Yorkshire hemp in a plant-based eco-resin (or as eco as resin can be) and wrapping these sticky bandages around the joints of three recognisably frame-shaped entities. Taped up to help them strengthen and solidify, they are left overnight, magically morphing (we hope) from a sticky mush into something tough and solid enough to carry humans and luggage for thousands of mountainous mile 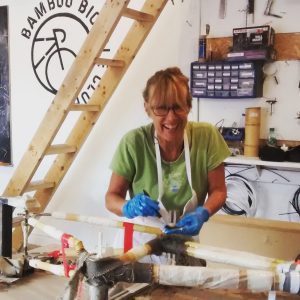 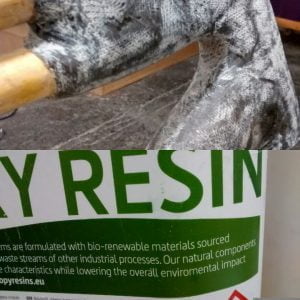 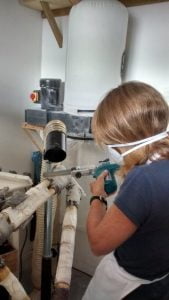 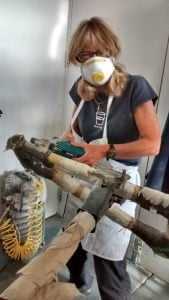 an art form. First with a machine sander and then with various grades of hand wielded sandpaper, I spend hours and hours and hours sculpting and stroking the curves and corners of my bike-to-be from the hardened blodge of resin and hemp. Some people become truly obsessive at this point, apparently, returning to the workshop over the course of weeks and even months. In any event, it’s an endurance job, as several parts of the process are, requiring a just-keep-going mindset and a conscious effort to keep the ‘are we nearly there yet’ questions at bay.

Finally accepting the shapes are about as good and as smooth as I’m going to be able to get them, I paint resin on all the hemp joints and say goodnight. All that remains now is to add a few details. Wheels, gears, that sort of thing.

I’ve optimistically borrowed some lights for the ride to Euston Station (now an evening jaunt rather than a morning two days before as originally anticipated.) About half way through the (new) final, final day, surrounded by boxes and off-cuts and dust and in the thick of a mad scramble for components and allen keys, I realise, this bike is not going to be leaving this workshop this evening. Not all the parts are even here yet, and I don’t want to rush – or have other people do any of it for me. I want to understand every bit of this process, so that, on the road, if things go wrong, I can figure out solutions from first principles. It’s a relief to acknowledge I need more time. Already, I have a completely different relationship with this almost-bike. I know its structure intimately, literally from the inside out. It’s a very special feeling and I want to do it justice.

So far, it’s been an extraordinary process. For some days, I’ve lived and breathed (literally) bamboo and bikes and bike build and dust. There has been an almost constant swinging of emotion from the sheer joy of working intensely on something practical, to a mildly beleaguered bewilderment as I try to figure out how this particular task relates to the final bike and whether this bit of scraping is a bit that will eventually be visible, or not. I’ve learned a ton of stuff, and would do several things differently another time. But by the end of the day, before running bike-less for the last train north, I’m riding briefly around the yard. No brakes, cables taped up, wrong forks. Nevertheless, I am on this magical machine that I have built – that I have built! – and its wheels are going round. Smoothly. Any remaining stress falls right away. I’m grinning and grinning and grinning.

Back in Cumbria, my road bike looks oddly symmetrical. My finger tips are sore to the touch from sanding and my hair so solid with dust that even Chris, most un-appearance focussed of partners, says, ‘you are going to wash it, aren’t you?!’ Aside from cleaning myself up, there is plenty to do. Amongst other things, I’m trying to make sense pages of numbers that should add up to the total bike weight and tell me how much of that weight is Cornish bamboo, how much is steel and alloy and rubber, and where it all comes from. I’ll then send this information to carbon foot-printing supremo, Mike Berners-Lee. How much better, carbon-wise, is a home-grown bamboo bicycle compared to a steel equivalent?! With a bit of luck I will soon find out.

Next week, I’m back in London. This time, I should be able to finish the job. I can feel the bike pulling at me. Part of me, of course, is already there. 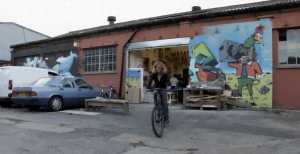 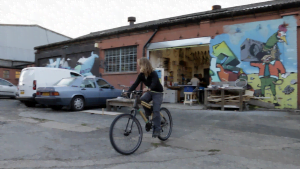