More and more people, buying more and more stuff. Because the production and distribution and packaging of that stuff uses energy and resources, and creates waste, this simple more-people-more-stuff formula lurks at the very heart of our current profoundly unsustainable societies. As WWF put it so powerfully, if everyone on earth enjoyed the lifestyle of an average Western European, we would need three planets. SO…. how on earth, if you are a business that makes or sells stuff, do you tackle the challenge of doing so sustainably, given that you are almost certainly operating within a system that requires you to make and sell more and more stuff, aka grow, in order to survive?

I shared this dilemma with the staff of Lyon Outdoor and Lyon Work and Rescue, a Cumbrian business based in Tebay. Back in the 60’s Ben Lyon, a keen caver, started making his own caving ladders. Then, on a caving trip in France, Mr Lyon met Mr Petzl and both admired each other’s equipment. Mr Lyon started importing Mr Petzl’s head-torches to the UK. Now Lyon are a leading distributer of quality outdoor equipment across the UK, and manufacturers of equipment for the search and rescue, access and safety industries. They also service that equipment so, should you happen to be stretchered off a UK hill by mountain rescue, one of the things you won’t have to worry about is whether the stretcher is up to the job. It will have been regularly overhauled by Lyon. They will probably have strength-tested Mountain Rescue’s ropes and climbing gear too. And, yes, they still make caving ladders.

I was at Lyon to talk about my interest in ‘Adventure Plus’: using (reasonably!) adventurous journeys to raise awareness and inspire action on some of our biggest environmental challenges. I showed slides from The Carbon Cycle climate change bike ride in the Rockies that I did ten years ago now, and outlined the plans for my upcoming trip. The aim this time is to cycle from Costa Rica to Cape Horn, criss-crossing the Andes and exploring biodiversity. What is it, what’s happening to it, why does this matter and above all, what can be done to protect it? The project will be called The Life Cycle – obviously! – and I’m planning to leave by freight ship for Costa Rica in December. Lyon have offered their support.

Which brings me back to the sustainability dilemma. I’m relatively new to the world of sponsorship and just learning how to navigate the pros and cons. I want my kit to be coherent with the environmental message of the journey. Which bits of kit are high impact? Out of all that lovely shiny tempting camping and biking equipment, what do I really need? Which bits of kit play into the problem and which – if any – can be seen as part of the solution? In sum, what should I say yes to, what no, and how should I decide? Apart from not taking stuff I don’t really need, part of my strategy has to be to go for kit made by companies that are working on reducing their environmental impacts, finding ways to compensate for the impacts they still have, and making quality kit that lasts as long as possible. So I feel pretty straightforwardly delighted to accept kit sponsorship from Ortlieb, makers of very fine bike panniers, via Lyon Outdoor. Apparently, some of Ortlieb’s retailers complain that they can’t sell enough of them because Ortlieb panniers virtually never wear out!

I’m going to be finding out more about where the main environmental impacts of Ortlieb panniers lie, how substantial 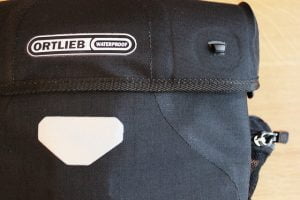 this footprint is and whether their new canvas-based panniers have reduced it. Meanwhile, I reckon there is a pretty good fit between The Life Cycle biodiversity bike ride and an environmentally motivated company that produces highly durable, high quality products, designed to support people getting out there and doing good stuff on bikes – in itself a great way to enjoy low-impact living. I once read that on a flat road without a head-wind, if such a thing exists, a cyclist can do ten miles per peanut and that cycling is the most efficient, low-carbon way of moving a human round ever invented! In addition, Ortlieb are members of the European Outdoor Conservation Association, an initiative that invests in projects protecting environment and nature worldwide.

As for Lyon, like all of us, they are on a sustainability journey and that’s a work in progress. Definite wins on the way so far include the impressive array of solar panels across their large south-facing roof; the company-wide commitment to after-sales service, to repairing kit rather than replacing it; the constant searching out or creation of quality, long-lasting products and a hanger-load of enthusiasm for doing more in the area of environmental sustainability in general. And Lyon are not only a major sponsor of Cumbria Wildlife Trust, but all their staff get to spend a day volunteering for the Trust on full pay. Did I say yes to the panniers? In this case it was pretty much a no brainer. I think it’s going to be a really good relationship. The hard bit will be choosing the colour …. 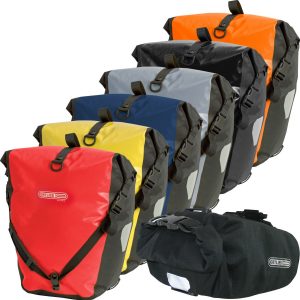