1) Lying in a hot bath after a beautiful first day’s ride, listening to a positive weather forecast.
2) Eating pie, chips and peas with a pint in the corner of a warm, friendly pub later, with inner permission to spend what remains of the evening before sleep takes over reading a really good novel while the locals good-humouredly watch the rugby.
3) The uniquely grin-arousing sensation of a bike rolling smooth on tarmac, pedal effort transformed into apparently greater-than-pedal-effort forward momentum. Even on a loaded touring bike. 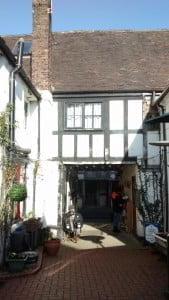 Of course, it’s not always like that. On this trip, I had constant luck. Like chancing on the cracking wee pub in Much Wenlock (‘just put the bike in the hallway, no-one will bother it there’) where I soaked up both hot bath and sleepy pie, fifty or so miles after leaving a friend’s house in Keele. That was a stand-out-in-memory-moment, too; big waves and a scatter of crows across the sky as he pointed me onto Three Mile Lane. I stopped to take a photo of that particular beginning, a non-descript road, a grey but dry sky, a tangled curve of leafless oak trees, all transmuted into sheer happiness, upwelling via the alchemy of cycling. Bike magic works on more or less any road (with the possible exception of the A35 to Honiton) transforming a journey utterly mundane in a car into a mini-adventure or, at least, a chance to feel conscious, exuberant, alive, fully there.

I’m not a ‘real’ cyclist. Always outdoorsy but utterly un-sporty at school, I’d fallen into cycling by accident. Over the years I’ve gone further and further but from a very unathletic starting point. If I can tour by bike, so can anyone. I’ll never be mega, in terms of distance or, especially, speed; nevertheless, cycling is probably the outdoor activity I would now keep, if I could only keep one. But it had been a long time. Hundreds of day rides but, bar a short trip the previous summer, I somehow hadn’t toured much for nearly a decade. And I’d been off the bike completely for a solid three months in the run up to Christmas. In the face of plummeted fitness and the horrible undertow of fear I might never get it back (now I’m officially a super-vet and all) I did the obvious sensible thing and entered the Fred Whitton Challenge. If you don’t know it, the Fred – locally known as ‘a good day out’ – involves riding 112 miles over all the main Lake District road passes. Hardnott Pass rears up like a wall in front of you after 98 miles, just for example. It’s fabulous, and on the tough side. I last rode that a decade ago too. 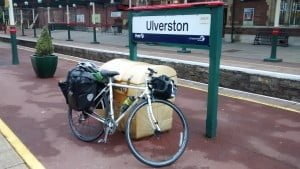 Entering the Fred, and the consequent strong desire not to let the side down by coming in last, was itself a way of motivating some real work on fitness in preparation for a full-on return to cycle touring, with an ‘Adventure Plus’ South American environmental bike ride follow up to The Carbon Cycle planned to start at the end of the year. So far, training had not gone well. The post-Christmas weather was so vile I’d succumbed and bought a turbo trainer in a half-price sale in my local friendly bike shop. This immediately sorted the weather but every time I’d finished a good week of basic road miles I’d gone down with a chest cough and, prone to bronchitis, been forced to withdraw to the sofa. By March (the Fred is early May) it was kill or cure and I hatched a plan to ride from Cumbria to Penzance to visit my dad. Via Wales. First bit by train, just to get into the swing of it. Hence the departure from Keele, which, in addition to a really good evening with a really good mate I don’t see often enough, had the advantage of missing out a chunk of gnarly urban navigation; a definite weak spot in my cycling CV. 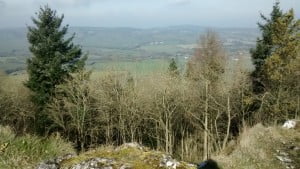 I left Much Wenlock on day two under blue skies and, by some strange road magic, the rest of the trip took its tone from there. Hazy views across Shropshire from Wenlock Edge, a reef rich with the skeletons of tiny coral animals who lived there many million years ago, when the whole area was washed by shallow tropical seas and located south of the equator. Coffee stops in sunshine when a toasted tea cake or a second veggie breakfast is the best food in the world. A memory-chased ride into Knighton on the Welsh borders and a reunion with Aunt Sue and Uncle Caple, now approaching their eighties, living in a bungalow full of whippets and horse-tack at the top of a very steep hill. I re-felt my furious, frustrated impatience as a child in the back of the car when parents wanted to stop for a picnic and I just urgently wanted to get there, then a small-holding in Cascob that was surely the place in my childhood I’d loved the most. Possibly the only place I’d felt I was in the right place. Undoubted source of a life-long love of dogs, horses, mud and Land Rovers; and of a still unresolved dilemma between the pull to land and animals, and desire to travel. 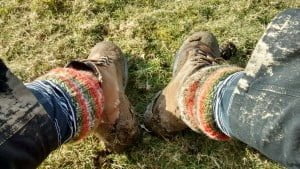 In Llanidloes, at my friend Emily’s house (at the top of another steep hill), I had a day off. A day off the bike anyway. We walked up a hill in wonderful sun and mud, trashing my only pair of off-the-bike shoes, and effortlessly talked the whole day by. From gender and bike mechanics to the best smoothies and cake; from her experiences of cycling in Iran to our very different experiences of Alaska (Em rode there in icy, blasting winter while I soaked up the shimmering autumn leaves and cool sunshine.) And my current favourite question: how to write about a journey from A – B without getting trapped into a linear ‘and the next day/and the next day/and the next day’ kind of narrative? How, as a travel-writer working from daily journal notes, do you move about in time in your words? The follow up to Em’s brilliantly written account of life as a London cycle courier What Goes Around will positively cartwheel through time, and we talked about how, in the follow up to The Carbon Cycle, I might do the same; using the visits and projects and issues as centrifugal points in an otherwise wandering, theme-based story. Because my biggest passion is not cycling, big though that is, but ‘adventure plus’: using cycling or other kinds of (somewhat) adventurous travel as a communication medium or a sort of Trojan Horse for our biggest environmental challenges, the environmental story smuggled in and (hopefully) made more engaging by the adventure travel one. 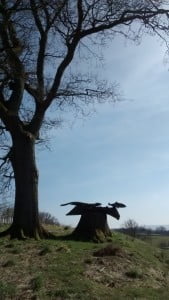 And if this current short journey had a shadow, it begins to show here. Just before leaving, the forecast was so bad I’d nearly invested in snow tyres, and the train to Keele had been delayed in the aftermath of yet more flooding the previous day. Now I was gleefully wheeling through the unexpected sunny and dry patch of March my trip had, with sheer luck, landed in. The dark side of weird weather though is, of course, global warming. February 2016 broke the record for increased average temperature by a ‘stunning’ margin, according to NASA, while 2015 was the hottest year since record keeping began in 1850, the previous records being held by 2014 and 2013. A bit like turning up the heat under a saucepan of water, there’s more energy in the climate system. In some places this literally means more heat – the Arctic has just experienced its warmest winter ever, with melting, unstable ice, and snow having to be delivered by truck to the start of the Iditarod dogsled race. In others, the increase in average temperature manifests on the ground as more severe weather; more storms, more draughts or, as in Cumbria amongst other counties, yet more ‘once in a lifetime’ floods. 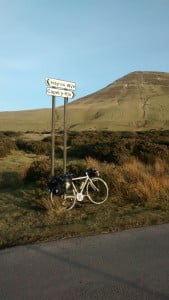 The highlights were many. An absolutely gorgeous ride from Llanidloes on quiet and beautiful mid-Wales roads, skylark song and the striking, dark-swerving silhouettes of red kites overhead, all leading (after a bit of gauntlet throwing from Emily) to a totally worth it detour up into the hills over Gospel Pass in late afternoon sunshine and a long, dusk into dark descent to Abergavenny (it really is downhill all the way). Another tough, hilly and wonderful ride from Exeter across Dartmoor, constantly meeting double-decade ago memories of tor to tor training rides and occasional picnics when I’d spent six months living and working on a friend’s eco-farm, riding her endurance horses in the days before that particular sport became wealthy. I was young but of course didn’t know it; didn’t even know there was such a thing as ‘being young’ – or not. Affirmation of some new friendships and confirmation of older ones, those friends 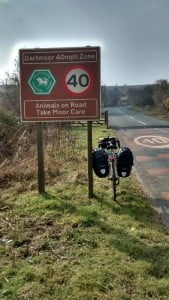 conveniently distributed more or less en route, that is. Kindness in cafes when I arrived zoned out and grimy, and random good luck, like, passing a computer shop right on the road in a tiny village the day after my laptop had declined to turn on (I’m sure there are things more frustrating than cycle touring with the weight of a laptop that doesn’t actually work, but that is up there.) Signs of hope that I might yet recover that lost fitness, as my mileage increased and I rode into the second week feeling stronger.

Topping a rise on the final evening, tired after the Dartmoor hills, and there it was. Saint Michael’s Mount suddenly in view in the bay at Penzance. Made it. It’s always really good to get there, but getting there by bike was definitely special. In the dawning age of Slow Travel it’s almost become a cliché, but travelling by bike really does make the journey the point, not just the destination. 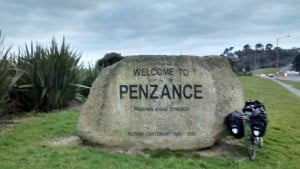 Everything is altered; the way you are really in the landscape, not hurtling by in a sound-proofed, smell-proofed box; the way strangers notice and treat you; the way you savour food, water, coffee, not cycling; the way your body comes back to life. And of course, from a climate perspective, cycling is the business. I once read that on a flat road with no headwind (if such a thing exists) a cyclist can do ten miles per peanut and, in comparison with, for example, planes, trains or automobiles, is possibly the most energy efficient, carbon efficient way of moving humans around ever invented. More of us cycling more, to more places for more reasons, is definitely on the list of higher human happiness/ lower environmental footprint win/win strategies. Though it does depend what you eat, with a startling difference between bacon v banana powered cycling in terms of CO2 (don’t even think about air-freighted asparagus.)

Restored to my office with the to do lists closing back in overhead like a rising spring tide my keenest thought is how easy it would have been not to have done it. To have stayed put on the endless quest to get-it-all-done. Of course, having jumped and gone, the backlogs are bigger, the late things are later. Note to future self: the backlogs and the lateness are absolutely worth it. The wonderful world keeps turning and there’s a million ways, still, to make the most of it. And that’s my resolution from all of this. Don’t leave it so long. Prioritise ways of carving out those precious time-spaces. And then, jump and go. 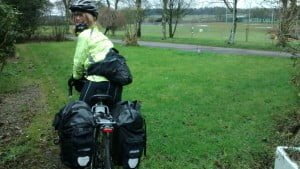 Keele to Penzance via mid-Wales